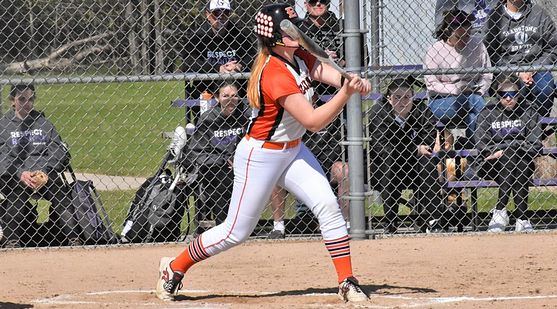 Story written by, and photos/videos taken by RRN Intern Braden Kerr.  Click the thumbnails to see the photos and videos, and listen to post-game interviews.

The Eskymos completed a sweep of the three-game season series, but unlike the other two games, this one was in doubt until the final inning.

Emily Moore returned to the circle to start the game, combining with McKayla Mott and Grayson LaMarche to allow one run on one hit while striking out fourteen batters.

“We’re all really good. I mean when we work together and we’re all pitching good,we are kind of unstoppable,” Emily Moore said about the pitching staff. When asked about the plan in the circle she said, “It kind of differs, I mean they have some hitters that will swing at high things and some that won’t. So it kind of differs on who’s up.”

“This was a great Gladstone Esky softball game today. We haven't had it in a few years. Rick and his staff have done a great job with this team. I've said it before, Gummy is becoming a really really good pitcher. She is throwing her best ball right now,” Escanaba coach Andy Fields said.

Montgomery Pepin pitched for the Braves and struck out nine batters. She had the Eskymo bats quiet for most of the day before they came alive down the stretch.

Through four innings of play, neither team had found a way to put any runs on the board. Both teams left runners stranded on third, in the first inning for Gladstone, and the fourth inning for Escanaba, while the pitchers sat down batter after batter.

In the fifth inning, Paxton Bullen came through for Escanaba with a two-out, two-run double to put Escanaba on the board.

Gladstone would get its first hit of the game in the sixth inning, and Lauren Sundquist would come home on Addie Trombley’s sacrifice bunt.

The floodgates opened in the seventh inning when Escanaba would bring eight runs home to put the game out of hand. Grayson Lamarche started the inning with a single and the Eskymos would play small ball, using a sacrifice bunt and an infield bunt to score her.

The next seven batters would reach base with Carney Salo hitting a two-run single and Erica Moore blasting a three-run home run.

“I had a few foul balls first off, I had like four in a row. I was just waiting for her to throw me the perfect one. I didn’t think it was going over actually but I thought it was going to be a little too high but sure enough,” Erica Moore said with a laugh.

Escanaba improved to 23-5 on the year and will now get a much needed break before playing Kingsford next week.

Gladstone fell to 18-6, with all six losses coming against highly ranked opponents.

“It’s important to get our girls uncomfortable. Because there is going to come a time where hopefully we go on a run and then that emotion and that atmosphere is important to them. It’s the only way you grow,” Coach Pepin said about the strength of their schedule.

Both teams are looking ahead to districts where the Eskymos head to Sault Ste. Marie for their games next Saturday, and the Braves play host next Friday for their games.