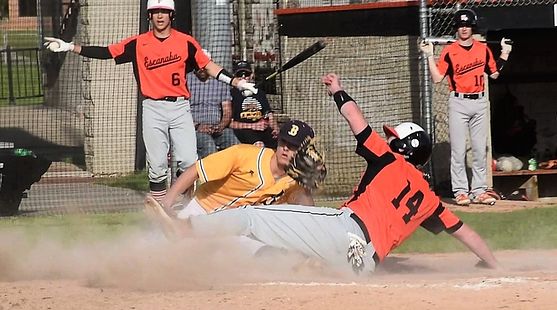 Click the thumbnails to see photos and videos, and listen to interviews with Chase Cloutier and Ben Johnson.

EHS improved to 24-8 on the season, heading into Saturday's district tournament in Sault Ste. Marie. The Eskymos will face the host Blue Devils in the first semifinal on Saturday.

Tuesday's first game against Menominee was actually the completion of a game that was suspended by rain two weeks ago. The game was picked up in the second inning, and the Eskymos quickly added to the 1-0 lead they already had when Matt Kaven squeezed home Chas Cloutier, who was on third base when the rains came during that game on May 12th.

Adam Willette threw five innings, allowing only three hits and striking out six innings to get the win. Hunter Lancour was overpowering in his two innings of relief, striking out all six batters he faced.

Brody Waara had two hits for Menominee. Gable Buck took the loss on the mound.

The Eskymos clinched a share of the Great Northern Conference championship with the win, ending up with the same 7-1 record as the co-champion Gladstone Braves.

The regularly-scheduled game between the Eskymos and Bark River-Harris gave both teams the chance to throw several pitchers ahead of this weekend's district tournament games.

Travis Mack threw for the Broncos, and was hurt by errors in the two innings that he threw. Both of Escanaba's runs against him were unearned, and he allowed only one hit and one walk.

Mason Bower threw the next two innings for the Broncos, and was charged with one run on three hits and two walks. Jared Hanson had an RBI single in the bottom of the fourth inning that brought home Ben Johnson, giving Escanaba a 3-0 lead.

Meanwhile, for the Eskymos, Hanson started on the mound, throwing two innings of scoreless and hitless ball, and he struck out four batters. Johnson followed him to the hill, and allowed one hit and two walks in his two innings, but he struck out all six of the outs.

The Eskymos put the game away with seven runs in the fifth inning, with Johnson reaching way down into the dirt to get down a suicide squeeze to bring Lancour home. Matt Zimmerman followed with a two-run single, with Johnson coming in opn a head-first slide after Bon LaChance scored. Hanson's pop fly single brought home another run, making it 7-0.

Lancour led the way offensively for the Eskymos with three hits.

Bark River-Harris finished the regular season with a 11-13 record. The Broncos face Manistique in the district semifinals Friday in Norway. That game will be broadcast on Eagle FM-107.3 at 2:00 Eastern time.

Escanaba (24-8) will face Sault Ste. Marie Saturday morning at 11:00 in the district semifinals against the host Blue Devils. They pulled out a 3-2 win over Kingsford in an eight-inning thriller in the "play-in game" Tuesday afternoon in the Sault.