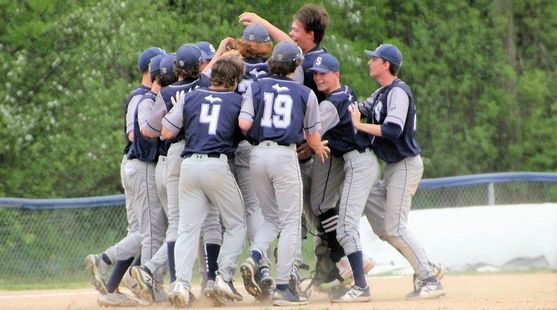 SAULT STE. MARIE---The Sault High Blue Devils and Kingsford Flivvers opened the MHSAA Division Two district baseball tournament Tuesday with a classic game that the regulation seven innings couldn't solve. The Blue Devils survived, 3-2, in eight innings, by scoring two runs in the bottom of the eighth inning when their season was one out away from coming to an end.

In the seventh, Riley Juneau's two-out base hit brought home the tying run, and then in the eighth, Dennis Neuens had the RBI single to put the Flivvers in front. A big double play on a Trevillian grounder up the middle got the Blue Devils out of the inning trailing just 2-1.

In the bottom half, a one-out single by Ethan Chambers put the tying run on, and Jake Davie bunted him to second.

That was the second out of the inning, and then Avery Wilson got a base hit to right field, putting runners at the corners. And then an unusual call with the game on the line: the umpire called a balk on Trevillian, bringing home the tying run.

And then Josh Lumsden, who had singled home the Soo's first run in the sixth inning, ripped an 0-2 pitch all the way to the left field fence, giving the Blue Devils the walk-off win.

Kingsford fell to 16-7 on the season. The Blue Devils improved to 17-12 and will host Escanaba in a district semifinal game Saturday morning at 11:00.