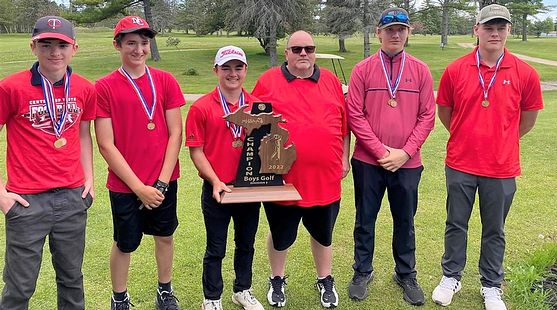 Mercier won his third straight Upper Peninsula championship, following in the footsteps of Hunter Eichorn of nearby Carney-Nadeau. The only thing that prevented Mercier from winning four straight U.P. titles was COVID-19, which caused the cancellation of the 2020 tournament.

Mercier burned through the course and blew past the competition, firing a 71. He won by 18 strokes over Lake Linden-Hubbell's Marcus Sutherland and Mid Peninsula's Michael Englund, who finished tied with 89's.

Mercier got plenty of help from his teammates, with Landen Hansen and Alex Pipkorn both shooting a 90, earning both top-five finishes.

Mercier will be playing at Division One South Dakota State this fall, following Eichhorn, who just finished a four-year D-1 career at Marquette University.

Mid Peninsula did not have enough golfers for a team score on Thursday, but the three Worlverines all finished in the top ten: Englund tied for second with 89, Bradly VanDamme sixth with 91, and Tristin Syers tenth with a 97.