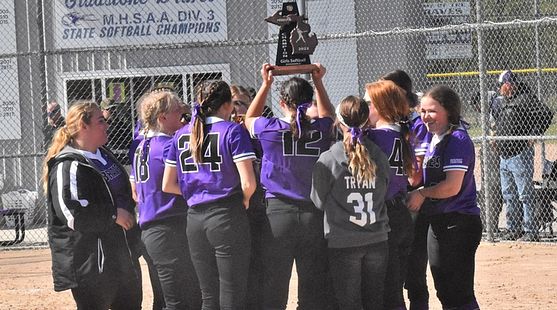 Click the thumbanils to see photos and videos, and to hear post-game comments from pitcher Montgomery Pepin and Manager Rick Pepin.

Lauren Sundquist started both games with a bang, hitting leadoff home-runs to set the tone early. The Braves would use that momentum with all nine batters reaching base safely the first time through the order in the early game, pushing 16 runs across before leaving the bases intentionally.

The Emeralds were shut out by Montgomery Pepin who struck out eight of the nine batters she faced. The game would end after two and a half innings with the score 17-0.

Pepin would also pitch the second game against Manistique, throwing another shutout, allowing two hits, and striking out 13 Maroons.

“I'm feeling pretty confident. We just need to hit more. I don’t know why we were not hitting this game, we should have been, but we weren't. I am very confident in my team,” said pitcher Montgomery Pepin.

The Braves played stellar defense only allowing four baserunners on the day. Lauren Sundquist would catch one runner stealing and picking another off at first base.

After Sundquist’s lead-off home run the Braves’ bats would go quiet. They would not register another hit until Reese Herioux would double in the fourth inning. Samara Sanville would single and Lu Martinez would lay down a bunt to bring home Herioux and a throwing error scored Sanville and put Martinez on third.

Herioux and Martinez would also lead the charge again in the sixth inning reaching base before Samantha Drielick singled in a run before Addie Trombley would bring home Drielick and Martinez to make the score 8-0.

“We struggled at the plate today for whatever reason, but Reese Herioux lead us today with two big hits, Sammy drielick had a base hit up the middle to score one, and then Addie Trombley came up to the plate and hit a single and score two more runs to give us a little breathing room,” Coach Pepin said.

The Gladstone Braves improved to 21-6 on the year and look ahead to regionals next.

Coach Pepin spoke about how they are feeling ahead of the games, “It changes a little bit now, We remind the girls that if you lose you go home. We are very excited. It will be a long week waiting for Saturday to get here. The anticipation and the excitement, but we’ll just keep working the process all week long and get our girls ready.”