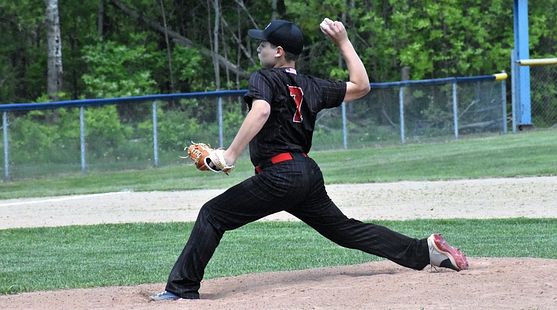 Click the thumbnails to see photos and videos taken by RRN Intern Braden Kerr
SAULT STE, MARIE---It's been a rough year at times for the Marquette High School baseball team.
The boys made the long trip to Sault Ste. Marie on Saturday for the MHSAA Division Two district semifinals against the ninth ranked team in the state, the Cheboygan Chiefs.
No one gave the Redmen any chance at all to win that game, except, perhaps, for the Redmen players and coaches themselves.
The Redmen darn near shocked the world before the Chiefs managed to scratch home a run in the bottom of the seventh inning to survive, 4-3. The Chiefs later played a classic championship game with Escanaba, and won on another walkoff, 1-0, in nine innings.
By records, Marquette had no business staying in this game. Marquette started the day with a 7-16 record, while Cheboygan came in at 28-5-1. And the Chiefs decided to “save” their top pitchers, Henry Stempky and Daniel Wilcome, for the finals.
And the Redmen didn't help themselves in the first inning when they missed two rather routine fly balls in the outfield, giving Cheboygan a 2-0 lead. But sophomore pitcher Isaac Sarles kept the Cheboygan batters off-balance, allowing only six hits, and when the Chiefs did hit the ball hard, third baseman Nash Riipi made the catches.
Marquette hung around against Cheboygan pitcher Kaden Blaskowski, getting four hits and two runs in four innings. Marquette trailed just 3-2, and a line drive to left field that could have given the Redmen the lead by Sarles was caught by Eli Couture.
Finally, in the seventh inning, Cheboygan Manager Kevin Baller went to his big lefty, Daniel Wilcome, to hold a 4-3 lead. With one out, Desmond Mullen hit a hard ground ball that took a bad hop over the shortstop and into the outfield for a hit. Then, Jacob Knauss worked Wilcome for a walk, putting runners at first and second.
A passed ball moved the runners ahead to second and third, and then Wilcome uncorked a wild pitch. Mullen scored the tying run. Wilcome bounced back to strike out Luke Mead to end the inning.
In the bottom of the seventh, though, the nine hitter in the Cheboygan order, Sean Postula, hit a ground ball that was missplayed and he ended up at second base. Stempky bunted him to third base, and then Marquette Manager Derek Swajanen walked Wilcome and Dylan Balazovic intentionally to load the bases.
Sarles got two strikes on Tyler Balazovic, but Balazovic got the fly ball he needed to end the ball game. It ultimately was dropped in center field, but it was plenty deep enough to score the winning run.
Mullen led the Redmen with two hits. Ultimately, the Redmen were done in by two things: five errors on defense, and 15 strikeouts at the plate.
Wilcome got the win on the mound despite giving up that unearned run in the seventh inning. Sarles took the loss, allowing only one earned run on six hits in a complete game (6 1/3 innings).