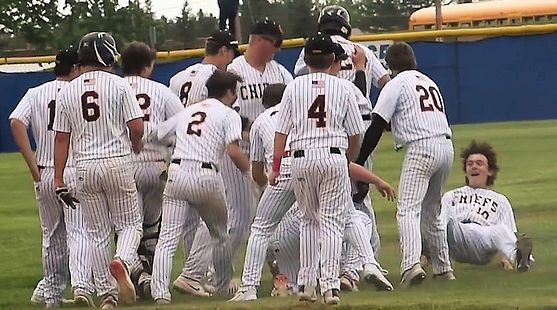 Click the thumbnails to see photos and videos taken by Braden Kerr, and to listen interviews with Jared Hanson, Trent Lawson, Hunter Lancour, Manager Scott Hanson. and listen to the radio call of Cheboygan's winning hit.

SAULT STE. MARIE---The Cheboygan Chiefs and Escanaba Eskymos had another classic battle on Saturday, as seven innings were not enough to settle the MHSAA Division Two district championship. In the end, the Chiefs pulled out a 1-0 win over the Eskymos in nine innings, one year after the Eskymos walked off the Chiefs by a run.

Escanaba earned the trophy last year with a dramatic 5-4 win over Cheboygan in the district final in Marquette, but it was different this time as the scene shifted to Sault Ste. Marie for the five-team tournament.

And pitchers ruled the MHSAA Division Two District as only ten runs were scored across the three games that were played. Escanaba beat Sault Ste. Marie 2-0, Cheboygan walked-off Marquette 4-3, and Cheboygan won 1-0 in 9 innings for the district title against Escanaba.

And this was after Sault High's Garrett Gorsuch threw eight innings in a walk-off victory over Kingsford on Tuesday in the play-in game, 3-2.

On Saturday, Gorsuch took the mound again to do battle against Jared Hanson and the Escanaba Eskymos. Hanson’s velocity overwhelmed the Blue Devi hitters early as he registered seven strikeouts through three innings of play. Both Hanson, and catcher Trent Lawson talked about how that was their plan early on and then when the hitters responded to the velocity they would mix in more offspeed pitches.

Hanson said that he, “Started off mostly just fastballs with a little cutter slider here and there, and then eventually every team is going to catch up to velocity at some point and so we started more changeups and sinkers and more sliders, stuff like that.”

Lawson echoed his pitcher, “I started to mix it up towards the end because he was losing a little velocity. Still calling a lot of fastballs towards the end to because they weren’t really hitting them hard.”

The plan worked like a charm as Hanson finished with 6 23 innings pitched allowing two hits and striking out 15. Lancour came in for the one pitch save as hanson had reached the limit.
On the other side, young sophomore Garrett Gorsuch pitched a complete game four hitter allowing two unearned runs and striking out nine. Two costly errors allowed runners to be in position to score on sacrifices for the Eskymo offense.
If i saw a good pitch then swing at it, and i saw a good pitch, but it tailed inside a little bit and i popped it straight up into my forehead. Making me follow his finger. Touching the spot seeing if it hurts at all or if im blurry. "I'm very lucky," Lawson said of his scary foul ball.
Lancour singled in the fourth inning before errors from shortstop jonah denuccio-mcshane and catcher jack bachand put him on third base. Ben Johnson executed the suicide squeeze to perfection to score Lancour and put Escanaba on the board.
In the next inning, Hanson singled to lead off the inning. Nick LaFave moved him over with a sacrifice bunt before another error from shortstop Denuccio-McShane put runners on second and third. Lawson would bring home Hanson to extend the lead with a shot toward right field that second baseman Matt Lumsden dove and made a play on, getting Lawson at first and saving his team a run.

But Esky still had a 2-0 lead, and then Hanson had to survive a rocky ending to get the win.
"I don't know man, I just had to make it interesting," Hanson laughed. "I was just a little tired. The mound was getting weird. Theres a big old hole out there. It is what it is. I thought I was close to the zone a couple of times."
Denuccio-McShane singled off Hanson to begin the seventh and advance to second on a wild pitch. Hanson struck out the next two batters before walking leadoff man ethan chambers ending his day. Lancour needed only one pitch  to get a ground out back to himself to secure the save.

What did Lawson tell Lancour?

"Throw strikes," Lawson said. "Get us out of this game. Get us to the next one.:
Marquette (7-16) had #9 cheboygan (28-5-1) on the ropes in the other semi-final, tying the game on a wild pitch in the top of the seventh before the chiefs walked off the game in the bottom of the inning to set up the much-anticipated rematch of the May 21st doubleheader in Cheboygan.

That was the day when Henry Stempky and Lancour went head-to-head in a pitchers duel where Escanaba prevailed 3-1 over the chiefs. The second game was tied at four and was decided on international tie-breaker rules where Cheboygan pulled out the win.
Well, this time, on Saturday, Lancour and Daniel Wilcome were pegged to start for each team. Wilcome had pitched earlier in the day and was limited to 85 pitches. He pitched 5 1/3 innings of no-hit ball before his pitch count was reached.

Stempky came on in relief and continued to shut down the eskymos.
Lancour threw eight-plus innings before reaching his pitch count, allowing just that one earned run. Lancour was emotional after his final start for the eskymos in a game where he gave everything that he had on the mound.
"It was a fight, it was definetly a fight through it all," he said, fighting back tears. "We knew it was going to be a very very low scoring, very good game. Wish we would have hopped around, some balls some different ways, but you have to tip your hat to Cheboygan, tip your hat to the rest of Escanaba. We did great, they did great, it was definetly one of the best games that I have ever played in. I threw strikes and my defense had my back all day and you cant really ask for anyhting more than that."
While both pitching staffs were dominant, both teams still had their chances to push across a run. Despite Escanaba having baserunners in every inning and Cheboygan having baserunners in seven innings, only two ever reached third base.

Eli Gardner was thrown out at home trying to score on an error in the eighth inning, and the winning run for Cheboygan, Tyler Balazovic, was the only other one.
Gardner had reached on a throwing error from the pitcher and was moved to second on a bunt. Lancour got an infield hit, and when he ball bounced off of second baseman, (Balazovic), Gardner tried for home and was thrown out by Wilcome, who was now at shortstop and recovered after the ball bounced off his teammate.
Coach Scott Hanson said, "On the play, I've gotta own that one, that one's on me. But here's the deal, somebody had to make plays, and I kind of forced the issue on that play."
In the bottom of the ninth, Balazovic led off with a single and advanced to second on a Kaleb Blaskowski walk. A Ben Johnson balk put runners on second and third, and brought Jake Jankoviak to the plate.
With the infield pulled in and two strikes in the count, Jankoviak bounced a ball up the middle that split the infielders and sent cheboygan into the regionals.
"One of the best baseball games that I've ever been involved in," Coach Hanson said. "It's not fun coming out on the swrong end of that. It was good baseball, what can you say. I cant tell you how proud I am of our kids. We really raised the level of our play."
"I want to think everyone that has been with me through these four years. Coach Hanson, all my teammates in the past, my parents, just the guys," Lancour said. "This is definitely going to be something that i miss a lot. Even going into college, this is going to be the thing I miss the most.
Escanaba finishes the season at 25-9. Coach Scott Hanson reflected on a season that started slow with a  7-5 record, before the Eskymos got hot and ripped off twenty wins and two losses. While the season did not end how they wanted it to the team can look at this season as a success.
"We were down in the dumps," Hanson said. "Since that timem, we played as good of baseball as anyone in the northern half of the state the last couple months. It says a lot about our kids. Thank you to our seniors, and i dont want to dwell on the future, but we had some young kids out there and i think our district is gonna be pretty darn tough the next couple of years."
Cheboygan improved to 30-5-1 on the season and will now move on to regional play where they will travel to Petoskey on Wednesday to play at Turcott Field.