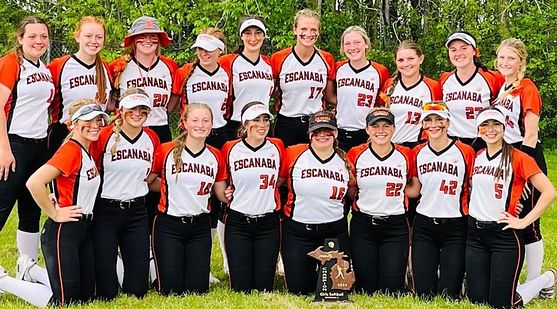 McKayla Mott led the way for the Eskymos pitching four innings in the first game allowing two runs on three hits, walking two and striking out two. Then in the late game Mott had three home runs to drive in five runs.

“Ive gotten two, but not three,” said Mott. “It was pretty effortless, just looking for the right pitch and she gave it to me.”

The Chiefs jumped ahead early after Mott walked the bases loaded when Amelia Johnson and Marley Couture drove in one run apiece.

The Eksymos responded, scoring five runs in the bottom of the inning, one run in the second and four runs in the third to open a 10-2 lead.

Emiy Moore came on in relief to throw two scoreless innings striking out six Chiefs while only allowing one hit.

In the second game Sault Ste. Marie would triumph over the Kingsford Flivvers by a score of 8-6.

Kingsford scored the first four runs of the game on singles by Elaina Bortolini, Delaney Cram, Holly Richer, and a double from Abby Terrain.

The Blue Devils responded with five runs of their own in the third inning. Paris Kagarise and Lucy Huskey both singled home a run, Audrey Smith hit a sacrifice fly to score Kagarise, and Danica Bergeron had a big two out double to score Huskey and Gussy Smith.

Abby Terrain would single home another run to tie the game for the Flivvers in the fourth inning. They would then retake the lead on a Bortolini grounder in the fifth.

Disaster would strike for Kingsford in the bottom of the inning when they would walk the bases loaded before a Bergeron single would drive in the tying run, and the go-ahead run would be walked home.

Audrey Smith singled home an insurance run in the sixth inning to send Sault Ste. Marie to the title game against Escanaba.

Escanaba would go on to dominate the district final game by a final score of 16-0 in five innings.

Grayson Lamarche controlled the game from start to finish, only allowing one hit and two walks while striking out 13 Blue Devils.

The Eskymo bats started early, pushing two runs across in the first inning before exploding for six runs in the second on a double from Segorski, a two-run single from Sliva, and the first of three home runs from Mott.

Anna Boutilier and McKayla Mott went back-to-back in the fourth inning, then Abby Hill would triple in a run and score herself on a Delaney McIntyre line drive.

Escanaba would add two more runs in the 5th again courtesy of a Mott homerun and Delaney McIntyre.

“It feels really good, especially going into our district and I think that the momentum is going to carry for the team and for me for the rest of our playoff run. It kind of gets our confidence up. Making sure that we all have our heads up going into those games and just keeping that positive energy,” Mott said after the games.

Escanaba improved to 26-5 on the season and will now look ahead to regionals. The Eskymos will look to avenge last year’s loss in the regional final against Gaylord. The team will travel to Gaylord to play Grant at 11 AM on Saturday. The number one team in the state, Gaylord will take on Big Rapids at 1 PM before the championship game at 3 PM.