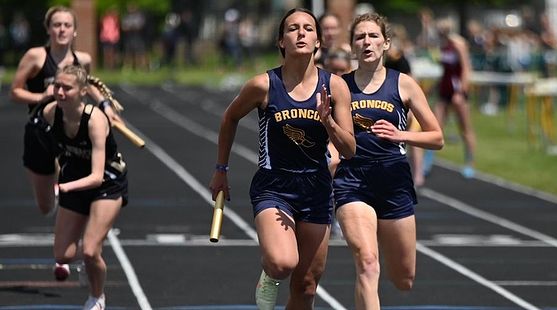 CLICK HERE to see all of the results via MHSAA

KINGSFORD — The Bark River-Harris girls made a statement Saturday in Kingsford while earning the first Upper Peninsula track & field title in their school’s history.

BR-H, which topped the Division 2 standings with 107 points, was followed by West Iron County with 74 and Ishpeming at 60.

“This is a very big moment,” said BR-H coach Jason Lockwood. “This is something our upperclassmen started talking about at the end of last season. Last year we came here with a small team and got third. The bigger numbers this year were a major factor. We’re very strong in the sprints and sprint relays. Having that depth really helps.”

“The 1,600 went well,” she said. “I just wanted to stay in front and get as many points for our team as I could. I tried to work on picking up the pace in the second and third laps.”

In the 3,200 (which combined the D-1 and D-2 runners competing at the same time), Houghton senior Ingrid Seagren led the entire race until the final home stretch when she dropped to third overall.

“I was just planning on staying with the group I was with, and when I saw she was getting tired, I thought there was a chance,” Korpi said. “I’m proud of Ingrid, and our team for taking third place. Third is good, especially for the numbers we have.”

“Today we had little bit of a rough handoff for three and four, but found a way to overcome that,” said Emeralds junior Kelsey Muth. “We’re just .3 second away from our school record in the 1,600 relay, which I think will give us motivation for next year. This is the first time all year we’ve won both the 1,600 and 3,200 relays. This is a real good way to wrap up the season.”