Escanaba Softball Looks To Get Revenge in Gaylord 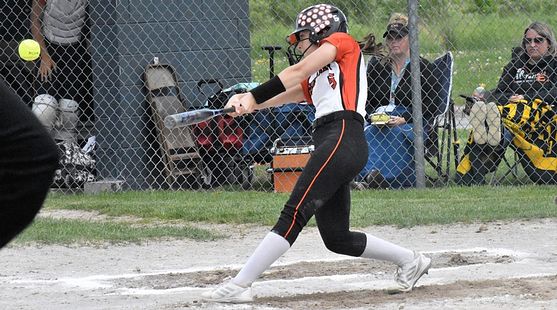 Click the thumbnails to hear comments from Carsyn Segorski and Carney Salo.

GAYLORD--The Escanaba High School Softball team is downstate in Gaylord to take part in the MHSAA Division 2 Regional tournament. The Eskymos take on the Grant Tigers Saturday Morning, and the winner will play the winner of the Gaylord vs. Big Rapids game for the regional championship.

“It’s a lot of hitting, kind of adjusting to the pitches, trying to catch up to that speed because we are obviously going to face better pitching,” Sophomore Carney Salo said of their preparation. When asked about their schedule she said, “I think that gets us ready like we're building up endurance already and we’re facing those harder teams so we're just getting ready for the postseason.”

Last season ended in heartbreak against the Blue Devils in the regional semifinals by a score of 6-5. Escanaba got down 4-0 before clawing back two runs to make the score 4-2 going into the seventh inning. Gaylord scored two runs to make it a four-run lead.

Escanaba mounted a two-out rally with hits by Lizzy Sliva, Anna Boutilier, and Carney Salo cut the lead to one. Nicole Famin came to the plate with a chance to bring home the tying run and grounded out to shortstop to end the game.

The Eskymos are back this year for Gaylord, but they first must get through Grant High School. The Grant Tigers compiled a record of 15-14 this season and won their district in walk-off fashion over the Ludington Orioles on a single from Jaycee Rider.

When asked about the potential Gaylord rematch Segorski said, “I think we prepare for every team the same, but they are a pretty good team, but so are we.”

The winner of the Gaylord regional will advance to the quarterfinals in Saginaw on Tuesday.

Meanwhile in Division 3, Gladstone High School softball plays host to their regional tournament. The Negaunee Miners and Kalkaska Blazers play the early game at 9:00 AM Saturday morning. In the following game, the Gladstone Braves play against the Boyne City Ramblers at 11:00 AM. The winners will play in the championship game for a chance to advance to the quarterfinals in Petoskey on Tuesday.

Gladstone’s games will be broadcast on FM 106.3.

Then in Division 4, Marion Park in Norway plays host to their regional finals. In the first game the Pickford Panthers play the Hancock Bulldogs, and then the Norway Knights battle the Ishpeming Hematites. The winners play in the championship game to decide who advances to the quarterfinal games in Sault Ste. Marie on Tuesday.