MILLER TIME! Mia Miller Does It All For Kalkaska 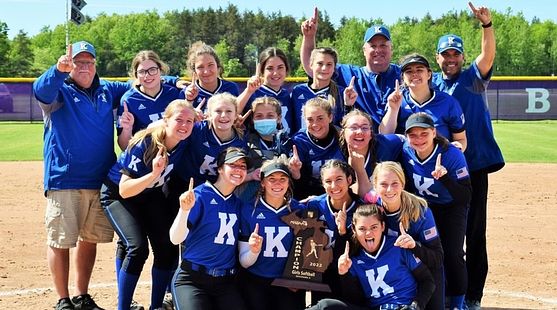 GLADSTONE- - - Mia Miller led the Kalkaska Blazers at the plate and in the circle against the Gladstone Braves in a 1-0 victory on Sunday in the MHSAA Division Three regional championship game at the Gladstone High School.

Gladstone had rolled past Boyne City 15-0, and Kalkaska battled Negaunee into extra innings before prevailing 5-4 in Saturday's semifinals before the rains came, forcing the rare Sunday contest to determine the championship.

The win for Kalkaska extended the coaching career of Rick Ponstein, who has been at it for 40 years and is retiring at the end of this season. The win avenged some earlier losses for the Blazers to the Braves, after Kalkaska won a dozen district titles over the past two decades and finally came home with a trophy.

On Saturday, the Blazers and Negaunee Miners started the day with a game that could not be decided in seven innings.

Negaunee opened the scoring in the second inning on a single from Kallen Schultz, but Kalkaska answered when a wild pitch allowed the tying run to score.

Samantha Richards put Negaunee up with a big three-run home run in the fourth inning.

Kalkaska would again push across a run on an error from the catcher in the bottom of the inning. In the fifth inning, the Blazers tied the game on another error from Negaunee and a Jaycee Mitchell double.

In the bottom of the eighth inning, two more errors allowed the Blazers to take home the victory.

Gladstone pushed across three runs in the first two innings against Boyne City before a twelve run third inning put the mercy rule into effect.

Montgomery Pepin pitched the first two innings allowing no hits and striking out one. Tia Schone allowed three hits in the third inning, but no runs to close the game.

The big third inning was started by an RBI triple from Rylee Gerow, a Montgomery Pepin single that score two runs on an error, and a Kensington Pepin two run home run to push the lead to 8-0 and the Braves never looked back.

Kensington Pepin was 3-3 on the day with a single and a double to go with the homerun. Montgomery Pepin was also 3-3 with two singles and a double. Rylee Gerow tripled and doubled. Tia Schone also singled and double for the Gladstone offense.

The Braves and Blazers met in the championship game to play for a chance to play in the quaerterfinal at Petoskey.

Both Montgomery Pepin and Miller took the circle for their respective teams again. Both pitchers were dominant throughout the game until it was suspended in the fourth inning.

The Blazers looked to jump out to an early lead getting the first two runners aboard before the Gladstone defense tightened up to cut down the advancing baserunners and escape the inning unblemished.

Through 3 2/3 innings Montgomery Pepin has allowed no hits, walked two and struck out two.

Both pitchers continued to dominate, but Miller only got stronger in the circle and at the plate. Miller registered nine of her 13 strikeouts on Sunday, including striking out the side in the bottom of the seventh to close the door.

Montgomery Pepin entered the day in the midst of a no-hitter. But Miller came to the plate in the sixth inning and put the ball over the left-field fence for the Blazers' first hit of the game, and the only run of the game.

Miller’s final line was three hits and thirteen strikeouts in a complete game shut-out where she also helped herself in the biggest way possible with a homerun for the only run scored across the two-day event.

The Braves end the season with a record of  22-7 falling in the regional finals. This young Braves team only graduates one senior and looks to next year when they will return most of their roster with another year of experience.

The Blazers (27-12) move on to face the Evart Wildcats. The quarterfinal game will be played in Petoskey on Tuesday to determine who will advance to the MHSAA Division 3 state semi-finals at Michigan State University.

In the MHSAA Division 4 regional at Norway's Marion Park, only one game was completed. Pickford beat Hancock 12-1 in six innings. Play resumed Sunday when Norway bested Ishpeming 2-0 to advance to the championship. Pickford would roll again beating Norway 11-4 to advance to the quarterfinals. They will take on Hillman on Tuesday in Sault Ste. Marie.