BY A THREAD: Esky Hangs On To Make Final Four 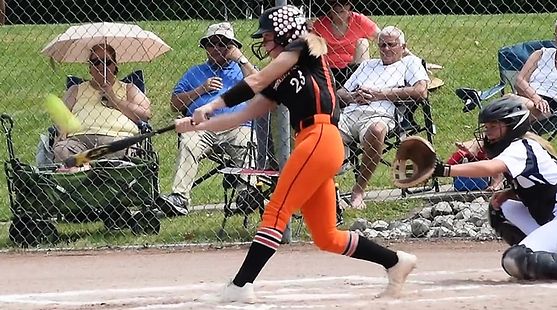 MIDLAND--- The Escanaba High School softball team jumped out to an early lead before they had to hang on in the final inning against the Hudsonville Unity Christian Crusaders. The final score was 4-3 Tuesday afternoon at Northwood University in Midland.

McKayla Mott got it done at the plate and in the circle for the Eskymos with a big two-run homerun in the first inning, an RBI single in the third inning, and the two inning save to close the game.

Carsyn Segorski reached on an error to open the game before a sacrifice bunt put her on second base. With two outs Lizzy Sliva singled up the middle to score Segorski. McKayla Mott came to the plate and worked a full count before hammering the ball well over the left field fence to give Escanaba a 3-0 lead in the first inning.

“She’s such a big bat to have, she’s got one of the most powerful swings we have on this team, and she gets a chunk of that ball and it’s gone most of the time,” Coach Andy Fields said of Mott.

When asked about the at-bat, Mott said, “I was really battling in that at-bat and she wasn’t really giving me much to work with and then she must have missed the spot, because I took it.”

“The three nothing lead really helped get our energy up, we were like yeah we got this, play hard the rest of the game,” Lizzy Sliva said of the early runs.

Grayson LaMarche started in the circle for Escanaba. La Marche only allowed two baserunners through the first three innings while striking out five Crusaders.

The Crusader bats woke up in the fourth inning with a leadoff single from Allie Lubben, followed with a single from Tory Decker. Natalie Bush drove in Lubben with a double off of the left field fence.

With Crusaders on second and third, and no outs, LaMarche induced a double play when Paxton Bullen scooped a pop-up just off of the ground and threw to second base to get the runner who had not tagged up. Kaycee Vander Veen then struck out to end the inning.

As the game continued on it was obvious that Escanaba had lost some of the early game energy and swagger that had propelled them into the lead.

Head Coach Andy Fields said, “I don’t know what the temperature out here is today, but it’s hot. Our girls aren’t exactly used to it, and I think down the stretch there it got to be a little much and communication kind of ceased. This is good we went through this, and we got through it, because the pressure is only going to amp up on Thursday.”

Unity Christian would threaten again in the fifth inning, putting runners on first and second with only one out. They would fail to score following a fielder’s choice, and another Grayson LaMarche strike out.

The top of the sixth would see the end of LaMarche in the circle after the leadoff batter reached on an error. McKayla Mott would come on in relief and sit down the next three batters to take a 4-1 lead into the seventh inning.

What did Coach Fields tell Mott in the circle, “Be relaxed and throw my game.”

Escanaba went quietly in the seventh to bring the Crusaders up for their last at bats.

A walk to Paige Rylaarsdam was sandwiched between a fly out and a ground out. A hot shot to third saw Anna Boutilier make a diving stop only to sail the throw to first. This allowed Rylaarsdam to score and Ashley Veldheer to reach second base.

Allie Lubben grounded the ball to Mott in the circle before another throwing error allowed Veldheer to score from second.

Anna Boutilier would make up for her earlier error making another diving stop, and throwing a dart to first base to send the Eskymos to East Lansing.

Allie Lubben started the game for Unity Christian, but she lasted only two innings allowing three unearned runs to score on three hits.

McKayla Mott finished with two innings pitched, with no hits, two unearned runs, and one strikeout to get the save.

After the game Coach Fields and multiple players all echoed the same message about how this was a another step towards the ultimate goal of winning the State Championship.

Coach Fields said, “Game five, we got through game five. Now we’re onto game six. You know it’s a basic goal, we just kind of talked about it before this all started, that we had to get to seven. We’ve made it to game six now and now it’s time to complete game six.”

“I’m super excited it was a goal all along, almost feel like a freshman again because we did it our freshman year,” Senior Lizzy Sliva said.

Senior Abby Hill said about the team, “Really good, it was a really good game, and the energy was really good for all of us. It’s really cool to watch and it’s a fun time.” When Hill got her at bat she said, “I got my opportunity, and I took it.”

The Escanaba Softball Team (30-5) advances to the semi-finals at Michigan State University. The Eskymos will take on Stevensville-Lakeshore Lancers Thursday evening at 5:30 PM. We will be broadcasting the game starting just after the 5 O’clock news WCHT 93.5 FM and 600 AM and online at rrnsports.com.