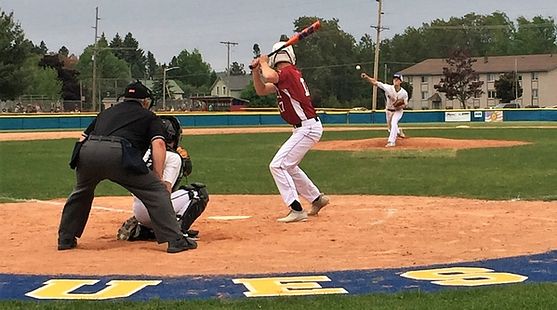 Mercier, who joined the Red Wave this season after the Bark River Bucs did not have a team, threw a complete-game two-hitter, needing only 85 pitches to throw all seven innings. He had nine strikeouts and issued only one walk. Mercier was the ace of the North Central High School baseball team this spring, and he says he was dialed in for Tuiesday's game.

"Coming into the game, I ice my arm before the game, every game," Mercier said. "It feels good te next game. So, I was ready today. I was just ready, mentally and pysically. I'm pretty proud of myself."

Mercier also had three hits at the plate, with one of them an RBI double.

"He was very impressive tonight," longtime Red Wave Manager John Lauzer said. "I mean, he's only 16 years old, and this was his first time throwing for me at the varsity level. I was hoping to get at least 45 pitches out of him, but the longer he pitched, and the longer the game went, the better he got."

The only Marquette Blues to get hits off of Mercier were Dallas Cobe and Brock Taylor, who had back-to-back singles with one out in the fourth inning. But Mercier got the next two outs.

Marquette pitcher Parker Maki, who threw the past season at Bay College and is a Superior Central High School graduate, went 4 1/3 innings and allowed only two hits and one run. That came in the fifth inning, breaking a 0-0 tie, when Mercier doubled home Kaeden Calcari, who led off the inning with a single. Menominee scored four more runs against the Blues bullpen.