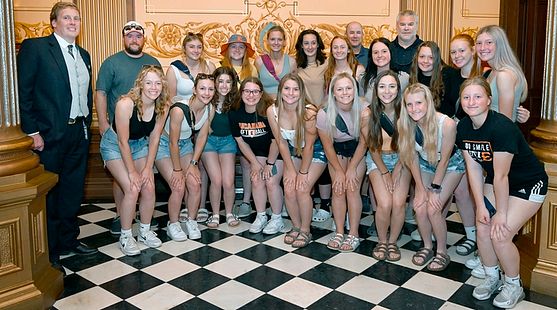 The Eskymos will face Stevensville-Lakeshore Thursday evening in the second semifinal, after Trenton faces Essexville-Garber in the earlier semifinal.

Wednesday was an off-day for the Eskymos, and they were given a tour of the Michigan state capitol building, as well as the Senate Chambers, by Upper Peninsula State Senator Ed McBroom.

"We've been able to field some really great teams, with lots of commitment, lots of hard work, and lots of good coaches," said McBroom (R-Norway). "It's exciting. We have several great basketball teams down here (Menominee and Ewen-Trout Creek in March), and now Escanaba girls softball. It's very special."

With the 96 degree weather outside, the Eskymos decided to practice at Lowell High School at 7 p.m., when temperatures ease. So, the girls had nothing to do during the day, and accepted the senator's last-minute invitation to come to downtown Lansing.

"It's fun," Eskymo senior pitcher Emily Moore said. "I mean, I did it as a freshman, and that's the year (2019) we won (the state title). We were excited when we heard we were going to do it again. We were like, it's good luck again. It's really cool to see the designs in here, and hearing about the history. It's always something fun to do while we have our days off."

"We're kind of superstitious going into this," Eskymo senior Carsyn Segorski added. "We've been talking about trying to do everything the same (as in 2019). And it's kind of cool, like a full circle, coming down here, and now we're coming here. It's interesting."

"It's fun when people from the U.P. visit," McBroom said. "It's family. Even if they're not my blood relations, they're family. I love it when people visit because I get a chance to share with them what I'm trying to do for them, and hear from them on what's going on in their lives. It's just always a pleasure."