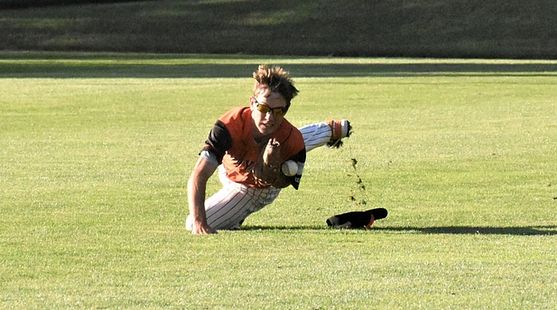 EAST LANSING –The Rudyard High School baseball team rallied from a 4-0 deficit late in its state semifinal game against the Riverview Gabriel Richard Pioneers, before a nightmare seventh inning turned the game against the Bulldogs in an 10-3 loss at McLean Stadium on the Michigan State University campus.

The Bulldogs took advantage of three errors for that two-out rally in the sixth inning. Austin Warner kept the inning going with a base hit to right field, Tate Besteman was safe on an error, and Brett Mayer got an infield hit. Then a fielder's choice play, followed by a hard-hit single off the first baseman by Eli Sprague. All of sudden, it was a 4-3 game.

EJ Suggitt got the first two outs of the seventh inning, and then things went bad.

At that point, the Pioneers had three more errors (5) than hits (2), but they got five straight base hits (plus a walk) to score six runs.

With the bases loaded and two outs, Gabriel Richard took a 5-3 lead on a wild pitch, and then senior Ashton Nowak delivered a two-run single to make it 7-3.

“It felt really good,” Nowak said. “Especially since I haven’t been really doing well at the plate the last couple of games. I’ve been getting on base, but not a lot of big hits. That was really nice.”

Senior Brenden Hills followed Nowak with an RBI single, a Rudyard error made it 9-3, and then another wild pitch scored a run to make it 10-3.

Senior Connor Silka didn’t allow an earned run in six innings of work on the mound, then Nowak pitched a scoreless seventh to finish the game for Gabriel Richard..

Gabriel Richard opened the scoring in the first inning, taking a 1-0 lead on an RBI groundout by Hills that scored Nowak, who was hit by a pitch to start the inning, took second on a throwing error and went to third on a wild pitch.

The score remained that way until the fifth inning when Gabriel Richard loaded the bases with nobody out and took a 2-0 lead on a sacrifice fly by senior Bryan Tuttle.

The Pioneers took a 3-0 lead on a two-out error. Gabriel Richard added another run in the sixth inning on another two-out error by the Bulldogs that made it 4-0.

Rudyard, which was making its first Semifinal appearance, finished 28-7-1.