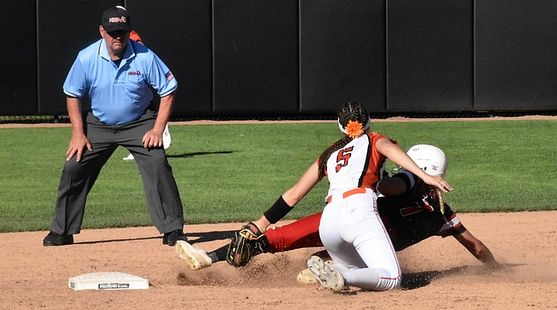 Click the thumbnails above for interviews, photos, and videos from the game, taken by RRN Intern Braden Kerr.

EAST LANSING--- Escanaba tied the game late, but Stevensville-Lakeshore manufactured a run in the bottom of the sixth to end the Eskymo’s season in the MHSAA Division 2 Semifinals. The final score was 2-1 Thursday night at Secchia Stadium at Michigan State University.

Escanaba (30-6), which won Division 2 titles in 2018 and 2019 and made the Semifinals for the fifth time in six seasons, was out of sorts from the start Thursday.

The Stevensville-Lakeshore (39-4)  Lancers headcoach Denny Dock has led Lancers softball to seven Finals championships, the most recent in 2015. Lakeshore finished runner-up in Division 2 in 2019.

Walks and errors played a major role in all the runs scored in the game. Lakeshore was able to take advantage one more time to create the difference on the scoreboard.

“When two great teams play, it just comes down to a few plays here and there and that’s really what it came down to,” Escanaba’s head coach Andy Fields said.

The Escanaba Eskymos started Emily Moore who only faced two batters before McKayla Mott came on in relief. Mott pitched into the fifth inning before being replaced by Grayson LaMarche who would earn the loss.

Moore walked the first batter on four pitches, and after two wild pitches was taken out of the game and replaced by Mott. Anna Chellman grounded the ball to first base and the throw home was to late to get Gianna Kerschbaum to give the Lancers a 1-0 lead.

The Lancers started Ava Mullen at pitcher who was in control of the game for five solid innings before Escanaba scratched a run across in the sixth. Avery Arwood closed the game out and secured the win.

Ava Mullen was in cruise control early as she struck out five of the first six batters she faced. The Eskymo hitters looked lost at the plate as Mullen repeatedly climbed the ladder to get the strike out. She would strike out ten batters through 5 2/3 innings only allowing two hits and one earned run.

In the third inning a leadoff single from Grayson LaMarche and a HBP to Carley McInerney would give Escanaba their first scoring chance.

Carsyn Segorski and Paxton Bullen would both bunt the ball back to Mullen who spun and threw to third to cut down the lead runner both times. Mullen’s sixth strikeout would end the threat for Lakeshore.

Coach Fields said of the decision to bunt, “Unfortunately, those bunts got pushed right back to the pitcher. You know the pitcher made a great play over to third, it was kind of an easy play, but that’s the name of the game.”

Both Mott and Mullen would cruise through the next three innings until Grayson LaMarche would replace Mott when the top of the order came around in the fifth inning.

In the top of the Paxton Bullen would walk and advance to second on a pop-up to get into scoring position. Lizzy Sliva singled to right field to bring home Bullen and tie the game.

“I was very focused, not going to lie, I was very nervous also. I was just taking a deep breath, focusing on three words I say before I bat, which is comfort, confidence, and balance. Then I got in there and I was super focused on the ball, and it happens,” Sliva said about her big hit.

McKayla Mott reached on an error and brought ended the day of Ava Mullen. Lakeshore turned to Avery Arwood in relief, and it turned out to be the correct move.

In the bottom of the sixth a leadoff single from Gabby Solloway fell in right field. A Carsyn Segorski error put runners on first and second, before they advanced on a sacrifice bunt. Solloway scored the decisive run on a wild pitch from LaMarche.

Avery Arwood would slam the door closed in the seventh inning striking out the side to end the game.

Coach Dock said of his team’s performance, “The girls believe in their pitchers and their defense, if we could get our bats out of the deep freeze, we’d be pretty good.”

Lakshore avenged their 2019 championship game loss to Escanaba and will now look to Saturday when they take on the Trenton Trojans for the MHSAA Division 2 State Championship.

Escanaba’s season comes to an end with a final reord of 30-6. The Eskymos returned to Lansing after two years away due to a cancelled season and last years defeat in Gaylord. They avenged the Gaylord loss, but ultimately fell short of their goal to win their third championship in five years.

After the game Senior Lizzy Sliva said, “I’m proud of all the accomplishments I’ve had to this point in my career. And I’m just excited for the underclassmen for their next season and hope that everyone can have great accomplishments for themselves.”

“We had a great season, we pitched well, our lineup was balanced hitting, we set school records for homeruns this year, overall, just a phenomenal ride. My senior group they have set the bar high for our underclassmen,” said Coach Fields about the season. His comments for the future, “We’ll be back next year.”