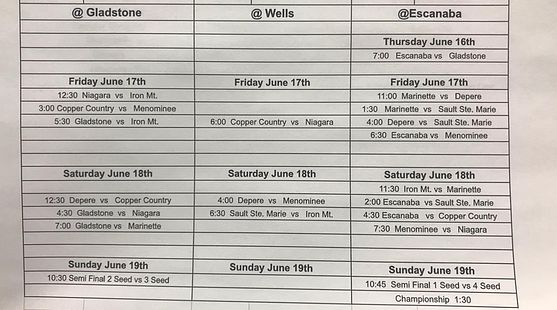 This stoty was written by RRN Intern Braden Kerr

ESCANABA--- The American Legion Baseball season got underway Thursday night at Al Ness Field in Escanaba. The Gladstone Indians and Escanaba Cubs opened the season against each other in the opening game of the Gregg Johnson Memorial Tournament.

The Indians would jump out to a 3-0 lead in the first inning before the Cubs would tie the game up.

“Maybe showed a little overconfident possibly, and it showed. Booted the ball around a little, little lackadaisical in places, give some extra bases and before you know it, it’s 3-0,” Gladstone Coach Jon Bintner said of the sluggish start.

In the top of the seventh inning, the Indians would plate four runners to seemingly put the game out of reach for the Cubs.

Escanaba would fall just short in their second comeback attempt scoring three runs in the bottom of the inning. Tyler Darmogray made a great defensive stop to end the game for the Indians.

The final score was 7-6, the Gladstone Indians over the Escanaba Cubs.

Gladstone coach Scott Kwarciany said about their first game, “Looking to gel as a team a little bit. We’ve got a couple of players that didn’t play high school ball on this team, and so were bringing some bodies around. It’s just a matter of getting another team chemistry going."

"Kids come off of high school ball and a lot of them are exhausted, and you turn around and a week later you’re on the field with a whole different system. We tried to keep it simple for them to get the feelers out. Obviously, it’s a tournament, so its important to get a win and that always feels good, it’s always good to get a win in that first game.”

The tournament swings into high gear on Friday with games all day in Escanaba, Gladstone, and at Bay College. After more games on Saturday, the final four of the nine teams will move on to the semifinals and finals on Sunday.