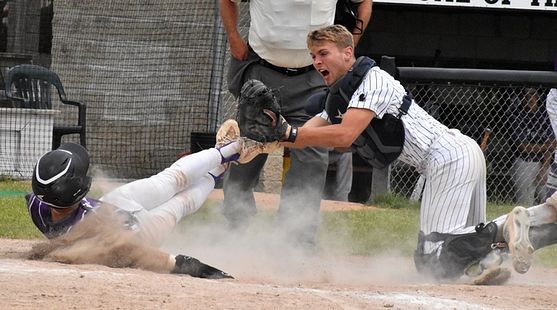 ESCANABA---The Iron Mountain Golds won their second straight Gregg Johnson Memorial Tournament championship on Sunday in Escanaba, rallying past the Copper Country Flames, 11-7, in the semifinals, and then holding off Marinette in the title game, 10-8.

The Gladstone Indians had their tournament run end in the other semifinal with a wild 6-5 loss to Marinette earlier in the day.

"It's just a team effort," Golds first baseman Beau Kralovec said. "We're all hitting the ball well. We scored 21 runs in the two games. Just a complete effort, got two wins, and took the championship again. Back-to-back! There's a lot of good players here. It just feels good to get the win."

"I was just seeing the ball really well," Golds catcher Chase Carlson said. "The bat was feeling good in my hands and it was just a good day at the plate for me. We all just time the ball up, and we hit the ball right after each other. We just have a good sequence at the plate."

Golds pitcher Isaac Lorenzoni loved having all of the offense. He came on in the sixth inning of the semifinal win over the Flames and earned the pitching win, then he made it 5 1/3 innings in the championship game before he reached his pitch limit for the day.

It was enough, though, for Lorenzoni to earn his second pitching win of the afternoon.

"It's amazing being able to give up a few runs here and there, and know that your offense can come back and score even more runs than they did," Lorezoni said. "It gives you more freedom. You can throw more breaking pitches, and use different locations because you can trust your offense to back you up."

Lorenzoni got plenty of run support in the championship game, as they pounded out 14 base hits. Riley Juneau had three hits and drove in three runs in the title game.

"It's the best feeling ever," Juneau said. "We battled all weekend. and fought through every single game. We played Marinette (Friday) and lost 17-5 with a bunch of errors, but we came and battled through this game. And we took it home."

It wasn't easy, though. Lorenzoni threw 5 1/3 innings, allowing only three hits and three runs before running out of pitches (along with the pitches he threw in the semifinal game relief appearance).

Carson Chartier came on to get the final outs with the Golds leading 9-0 and threatening to win on the mercy rule. But the defense fell apart late, and Marinette scored eigt runs over the final two innings. Adam Lemery and Lane Whiting comtrinuted RBI hits for Marinette in those final two innings as well, before Chartier finally shut the door.

Nolan Amundson had two hits and two RBI in the championship game, wile Carlson had three hits and Kralovec added two hits.  Both Carlson and Kralovec hit shots to the fence late in the game off Marinette relief pitcher Ashton Lebich.

In the win over the Copper Country, the Golds rallied from a 7-3 deficit with four runs in the fourth inning and three more in the sixth. Carson McLean threw the first 4 2/3 innings and got a no-decision. Lorenzoni tossed the final 2 1/3 innings for the win.

Dylan Horning took the loss for the Flames, who entered the semifinal with a 4-0 record in the tournament but ran out of pitching. Kade Farrell had two hits for the Flames.

Henry McRoberts had a hit in each game and scored three runs altogether for the Golds.

MARINETTE 6, GLADSTONE 5---Earlier, the Marinette legion team moved into the championship by holding off the Gladstone Indians, 6-5.

The Indians had a rough time on defense, making eight errors, all of them on the infield. Indians pitcher Braden Sundquist was the unlucky one, although his dropped pop up was one of the errors that led to a Marinette run in a particularly-awful third inning.

But Gladstone put on a late rally, however. They got a run back on an RBI single by Johnny Soderman in the sixth inning and then in the seventh inning, trailing 6-2, Sundquist smoked a double up the gap to bring his team to within 6-3. Two straight bases loafed walks gave Gladstone two mroe runs before lefty Ashton Lebich came in to strike out Aedan Creten to end the ballgame with the tying and go-ahead runs on base.

"It's tough if you're gonna make ten errors," Indians Manager Scott Kwarciany said. "Its amazing that we really had a chance to win. But, you know, credit to their team. They did a lot of good things. But our boys, they did a lot of good things too. We're not going to focus on the negative things here. We were right in this game, and the one thing they take away from this is that they proved to themselves that they can play with that team."

One outstanding defensive play for Gladstone came in the second inning when Adam Lemery smoked a double to the right field fence. Isaac Ketchum hustled to get to it in the corner, threw to cutoff man Aedan Creten, who threw a strike to catcher Nick Martin for the tag on Logan Shallow for the big out.

Marinette returned the favor an inning later when Casey Alworden tried to squeeze home Martin, but Shallow got the ball and whipped it to catcher Braeden McMahon for the tag on Martin, who was trying to score the Indians' second run.

"You can't ask for anymore than what he did." Kwarciany said. "Throws 85 pitches. Traveled all the way from Grand Rapids last night to be able to play this morning. Credit to him. He threw one heck of a game."

Adam Lemery had two hits, including an RBI double, and Chad Kenney added an RBI single for Marinette. Gladstone finished the weekend with a 3-2 record, and is set for a busy week, with games Tuesday in Marquette and Wednesday in DePere, Wis., before heading to Marinette for the Firecracker Tournament next weekend.

"We told the boys, a lot of positives from this weekend, we represnted Gladstone Indians Baseball really well, and we look forward to heading into next weekend," Kwarciany said.