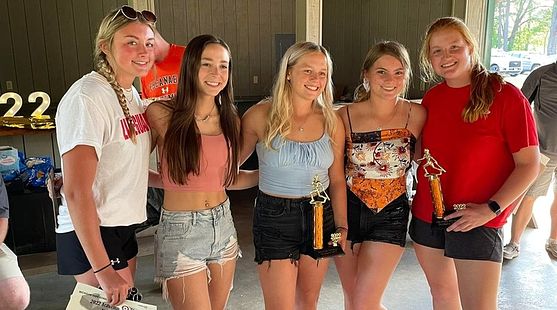 Click the thumbnails to see photos and videos, and interviews, from Tuesday's program.

ESCANABA---The Escanaba Eskymos softball team held its post-season awards program Monday night at the Pioneer Trail Park. The program was the last get-together for the team, less than a week after the season ended in the state semifinals.

"I was pretty excited," said Sliva, who will play at Bay College this fall. "I've never been an All-State player before, so it's cool. I hit it right to (opposing) players last year. I hit it hard, but right to them. But this year, I just got better, put a lot of hard work in, and it worked out for me."

"I was actually really surprised," Moore said. "Andy (Fields) told me, like a few days ago, he texted me and said 'congrats on All-State' and I was like, I didn't even know I was All-State! So, it was really exciting."

The team awards were given to the girls after a vote by the Eskymo coaching staff, which Manager Andy Fields called a "very tough vote". LaMarche and catcher Carley Bowden were chosen co-Rookies of the Year, Moore was the Defensive team MVP, and Sliva was the Offensive MVP. Senior Carsyn Segorski was given the "Little I" character award.

The entire Escanaba team was named All-Academic All-State for an eighth straight year, wity an overall team Grade Point Average of 3.8. Fields says all five of the Eskymo seniors were all also All-State Academic picks as individuals.