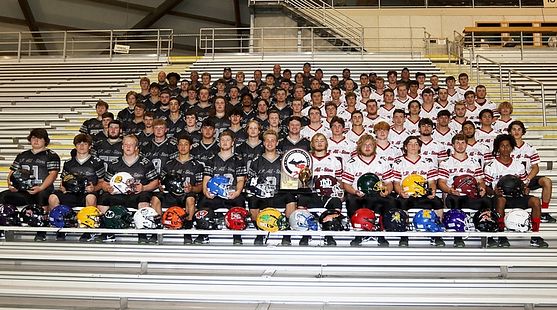 MARQUETTE---Eighty-two of this year’s seniors and fourteen coaches from all over the Upper Peninsula converged on the Superior Dome Monday to begin a full week of All-Star Football and activities.

The second day of Football Week on Tuesday saw both teams settling in to their practice routines.  Practice was held once in the morning and again in the afternoon.

Both teams solidified their personnel and began to implement their game plans.

Some players changed positions, based on the needs of the team, and how their talents might best be utilized.  The offenses worked on different packages that would fit best with their individual talent.  The defenses began developing plans for stopping the different offensive sets.  Each practice saw the teams creating better chemistry and improved execution of their plays.  Overall, at the end of day 2, these 80+ players from throughout the U.P. looked like two teams who are practicing for a game on Saturday, not a group of individuals thrown together just one day ago.

The biggest challenge to this year’s game is the addition of “motion” to the offense, which was implemented several years ago.  Any eligible offensive player can go in motion, which means there is a huge increase in the number of plays which can be run, and many different offensive players become threats to score.  It also creates issues for the defense on how they will cover all of the players who may score.  The offensive coaches have been busy creating new plays to confuse the defense, and the defense is trying to adjust.  We’ll have to wait until Saturday to find out which way the scales will tip in the scoring department.

Tuesday evening was Media Day at the Dome and there was a palpable excitement in the air.  Players were interviewed and team and individual pictures were taken.  Media on hand included TV, radio and newspapers, all eager to get the players’ perspectives on the game.

It was nice for the media to have access to all the players from throughout the U.P., not just their own local players.

The players are getting much better at speaking to the media and answering questions regarding what their experiences have been like during All-Star Week.  Getting players out of their comfort zones and accepting new challenges is definitely an emphasis for the week, so it is good to see the players accepting these new roles on and off the field.

It all kicked off on Monday with a food drive for the St. Vincent de Paul food pantry.

All of the players and coaches collected food and brought it with them to check-in, which was then taken to St. Vincent de Paul.  The huge quantity of food collected is a testament to how well these players are supported in their communities.  Staff at the food pantry were elated and welcomed the donation with much gratitude.

Organized locally, members of the Society of St. Vincent de Paul, witness God’s love by embracing all works of charity and justice.  The Society collaborates with other people of good will in relieving need and addressing its causes, making no distinction in those served.

Friends in need may receive assistance with food, shelter, utilities, rent, material needs, prescriptions, transportation and other forms of charity.  The stores are successful due to the generosity of community members who donate.  The U.P. Football All-Star Game is very pleased to be a part of the community helping others in need.

After the players checked in, each team completed two practices. Both teams got to practice once in the Dome, and for many, it was the first time being in the Dome and playing on the turf. The coaches talked early and often about making the most of their opportunities and taking advantage of the time here to make new friends and enjoy the experience.

The Black Team coaches all have many years of history working together, so they are a very cohesive group already.  They also have many All-Star Game appearances, so they are familiar with the week and what it takes to be successful.

Both Gavin Sundberg (’19) and Tyler Thomas (‘14) played in this game when they were seniors.  It is great to have former players go into coaching and continue the U.P. Football tradition.  That certainly keeps an event like this going.

Team Red head coach Joe Noha of Menominee brought all of his assistants from Menominee.

They include Chad Brandt, Lucas Chouinard, Dave Clarke, Mason Kewley and Dave Mathieu. Coach Noha will be stepping down as head coach at Menominee next fall, and Coach Brandt will take over the helm of the Maroon program, so this year’s All-Star Game serves as a changing of the guard for Menominee, and a chance for all of the coaches to work together one last time before the coaching change next fall.

The first practice is always about getting the players into the positions where they can benefit the team best.  The All-Star Game provides many opportunities for players to get experience in different positions they have not tried before.

With the small size of most U.P. high school rosters, the best players often play positions where they are needed most, and do not get a chance to experience other positions they might be more suited to play.  With so many great players all on the same team here, the coaches are able to move players around to accentuate their strengths, so it is fun to watch the players thrive at multiple positions.

Both teams spent time evaluating the talents of each player as they worked through the drills and formations.

The players started to immediately develop some chemistry with each repetition and play.  It was easy to see why these players were selected as the best in the U.P., because it did not take them long to settle into a practice routine and begin looking like a football team.

Both teams spent time in their individual position groups, as well as scrimmaging offense vs defense as an entire unit.  Spirits were definitely soaring when the groups came together and guys got a chance to finally hit each other, after so many months out of pads.

It is hard to tell at this point which team has an advantage. Both teams are working hard to figure out their personnel and where each player can help the team in the best way. We will have to see how the week progresses, but both teams look to be very focused on their own game plans.  Each team has players with unique strengths, and the coaches are developing ways to get the most out of every player and create the most advantageous match-ups.