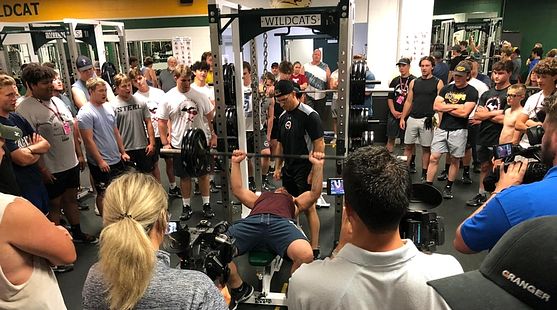 MARQUETTE---The highlight of day three for the U.P. All-Star football players Wednesday was the Skills Challenge.

Two players made the All-Time Record list for their efforts.  Chance Bridgers, Hancock, pushed 25 reps in the 225 pound bench press, which earned him second place all-time in that category.  Hunter Potier, Gladstone, threw the ball 58 yards, which was good enough to move into second place all-time.

For some of the challenges, the players were split into two divisions, lineman and non-lineman.  Having two divisions gives those challenges a unique atmosphere, as there are several competitions taking place within each event.  The three events that are split are: Fastest Man, Strongest Man and Receiver Challenge.

Results for the Players Challenge are as follows:

The Skills Challenge gave the players a much-needed rest from the grind of two practices per day. Each event which was performed had a gallery of players watching. Everyone was gathered around the competitors, cheering them on while they competed.

There were some friendly rivalries within each competition, but the atmosphere was casual and all the players enjoyed the events.

In addition to some local television and radio media in attendance, there were also some parents and fans that came by to watch the skills challenges. They were able to get on the field and take some pictures up close of their favorite players while they competed.  Both squads have the rest of the afternoon off to relax and let their bodies recover from the physical stress of practice.

The players will next host a Youth Camp at the Dome Thursday evening from 6:30-8:00 PM.  All kids ages 6 and up are welcome to attend.  All-Star Banquet is set for Friday at the University Center, 6 PM.