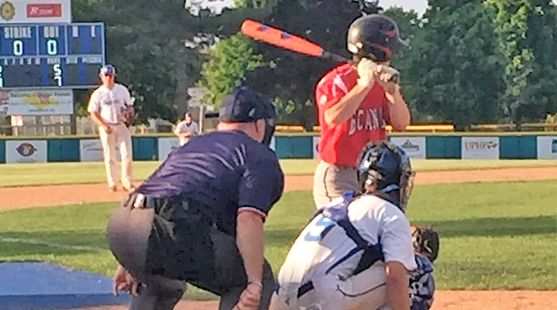 MARQUETTE---The Escanaba Cubs American Legion Baseball team scored 13 runs in the top of the seventh inning and beat the Marquette Blues, 21-9, in a sloppy make-up game at Marquette's Haley Field.

With both teams scheduled to play multiple games this weekend in the Marinette Firecracker Tournament, neither wanted to use any pitchers beyond 45 pitches. The Blues ended up using seven pitchers and the Cubs threw five.

“Once we all started getting excited and the bats started hitting the ball, we started scoring runs,” said Cubs third baseman Jack McEvers, who was on base six times and drove in three runs. “I've never seen this with my own eyes. It looks like a football score. I've never seen, or been apart of, a game quite like this. I still can't believe that we put up that many runs.”

“If you didn't see it yourself, you wouldn't believe it,” Cubs Manager Jon Bintner said. “That was a pleasant surprise, definitely. They do a good job of not striking out, being able to work counts, and with two strikes, just put the bat on the ball. It's funny how baseball works.”

It was a back-and-forth game all night long, with Marquette leading, 4-2, after two innings, and 6-3 going to the fifth inning. The Cubs scored three runs in the top of the sixth inning on an RBI double by Jack McEvers and an RBI single by Nick Kolich to take an 8-7 lead.

Marquette got a run back in the bottom of the sixth on an error, hit batsman, and a groundout.

That sent the game to the seventh inning tied at 8-8.

That's when things fell apart for the Blues. Chase Cloutier walked and Bon LaChance doubled him home to put Escanaba ahead, 9-8. McEvers followed up with an RBI double to make it 10-8, then Kolich came through with a shot to right field that scored two runs, making it a 12-8 game.

From there, the walks added up on the Marquette pitchers, and then Hunter Lancour singled in two runs and LaChance followed with an RBI single of his own to make it a 16-8 game. The Cubs had 16 hits, but Marquette pitchers walked 15 batters.

“We were just talking about how long that baseball game was, and 15 walks, well now I understand why, and our pitchers struggled at times too,” Bintner said. “But, it shows patience on the part of our hitters, while being aggressive, too.”

Escanaba improved to 3-2 on the season.

Marquette plays in the Firecracker Tournament Friday at 1:00 ET against the Green Bay Shockers. It will be broadcast live on WUPT-FM (100.3 The Point) and on-line at www.radioresultsnetwork.com.

Escanaba has the late game at the Firecracker, against the host Marinette team at 8:30 ET Friday. It will be broadcast on WCHT-FM/AM (93.5) and on-line at www.rrnsports.com.